Acne – When pimples come out! 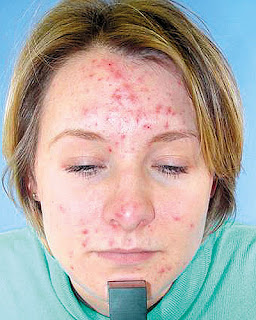 Acne is a large cosmetic problem of about 85% of teenagers. It produces unpleasant pimples and lesions on the face, that if unproperly taken care of, can cause scars and can be painful. It’s not a wonder that teens often refer to it as ‘the plague’. Acne commonly starts in the early teen years , when the oil glands in the body start making more sebum (oil). This happens at adrenarche ( the start of hormonal production in the adrenals ). In people who have acne, dead skin cells mix with the extra oil and plug up hair follicles in the skin. Bacteria ( Propionibacterium acnes ) that grows in the hair follicles causes more skin irritation.
A “whitehead” occurs when the hair follicle is plugged with oil and skin cells. If the follicle is plugged near the surface of the skin and the air touches it, it turns black and is called a “blackhead.” These blackheads aren’t caused by dirt.If the wall of a plugged follicle breaks, the area swells and turns into a red bump. If the follicle wall breaks near the skin surface, the bump usually becomes a pimple. If the wall breaks deep in the skin, acne nodules or cysts can form. This is called “cystic acne.” This type can not only be a cosmetic problem that can lead to lower self – esteem, but it can even be painful to the touch.
For most people, acne diminishes over time and tends to disappear—or at the very least decrease—after one reaches his or her early twenties, but for some people it may continue longer than that.

Location
The face and upper neck are the most commonly affected, but the chest, back and shoulders may have acne as well. The upper arms can also have acne, but lesions found there are often keratosis pilaris, not acne. Typical acne lesions are comedones, inflammatory papules, pustules and nodules.
Causes
A. Family/Genetic history. If your parents or siblings had acne, you have got a greater possibility of having acne. A family history of acne is associated with an earlier occurrence of acne and an increased number of acne lesions.
B. Hormonal activity, such as menstrual cycles and puberty. During puberty, an increase in male sex hormones called androgens cause the glands to get larger and make more sebum.
C. Hyperactive sebaceous glands, secondary to hormone increases.
D. Bacteria. Propionibacterium acnes (P. acnes) is the anaerobic bacterium that causes acne.
E. Skin irritation or scratching of any sort will activate inflammation.
F. Less commonly, use of anabolic steroids ( weight lifters and others ), medication containing halogens (iodides, chlorides, bromides), lithium, barbiturates, or androgens.
With respect to diet, a study did find a positive epidemiological association between acne and consumption of partially skimmed milk, instant breakfast drink, sherbet, cottage cheese, and cream cheese, probably due to hormones (such as several sex hormones and bovine IGF-I) present in cow milk. Because seafood often contains relatively high levels of iodine (which is known to make existing acne worse but not cause an acne outbreak ), people who are prone to acne may want to avoid excessive consumption of foods high in iodine. It has been suggested that there is a link between diets high in refined sugars and processed foods and acne. The hypothesis is that refined sugars and white breads, produce an overload in metabolic glucose that is rapidly converted into the types of fat that can build up in sebaceous glands. Even despite this data, there is a systematic review , published in 2005 that found “surprisingly little evidence exists for the efficacy or lack of efficacy of dietary factors, face-washing and sunlight exposure in the management of acne.”

Treatment
First let’s give some common sense advice to try to reduce acne or at least manage it as best as possible
-Develop a hygiene routine aimed at acne prevention. Washing ones face twice daily is a healthy hygiene habit that can be developed even before puberty. This can be done in front of the sink or in the shower. As a teen’s hair can be more greasy because of hormones, encourage a hair style that keeps the hair off of their face and a daily washing.
-Use first over-the-counter acne washes and treatments. Spend some time talking with your teen and your pharmacist about the different options of acne treatment available.
-Be understanding, but realistic. A teen’s self-esteem really takes a blow when they have a breakout of acne. Still, they will still need to meet their responsibilities such as social gatherings and school.
– Avoid bad habits. Keep your hands away from the face and not pick or scratch at pimples! This will avoid acne from getting worse and causing scarring.

When it gets bad, visit a dermatologist or a regular family physician . There is nothing you or your teen will be able to do if his/her acne is constant and uncontrollable. You can avoid permanent scarring and infections by visiting a specialist and following his advice.

A. Regular Medical Treatment
1. Topical bactericidals
Benzoyl peroxide may be used in mild to moderate acne. The gel or cream containing benzoyl peroxide is rubbed, twice daily, into the pores over the affected region. Bar soaps or washes may also be used and vary from 2 to 10% in strength. Prescription Benzoil peroxide seems to penetrate deeper within the pores, with equal concentration than the over the counter ones. The way it works is by dissolving the keratin plugging the pores and killing P.acnes. Unlike antibiotics, benzoyl peroxide has the advantage of not producing bacterial resistance. It’s side effects are very well known and they include dryness, local irritation and redness. A sensible regimen may include benzoil peroxide and moisturisers ( that don’t produce acne! ) to help avoid overdrying the skin.
2. Topical antibiotics
Externally applied antibiotics such as erythromycin, clindamycin, Stiemycin, or tetracycline aim to kill the bacteria that are harbored in the blocked follicles. Topical use of antibiotics is equally as effective as oral use, and avoids possible side effects including upset stomach and drug interactions (e.g. it will not affect use of the oral contraceptive pill).
3. Oral antibiotics
Oral antibiotics used to treat acne include erythromycin or one of the tetracycline antibiotics (doxycycline, minocycline, or lymecycline). However, reducing the P. acnes bacteria will not, in itself, do anything to reduce the oil secretion. Additionally P. Acnes is becomming increasingly resistant to antibiotics. Furthermore, acne will generally reappear quite soon after the end of treatment. It has been found that sub-antimicrobial doses of antibiotics such as minocycline also improve acne. It is believed that minocycline’s anti-inflammatory effect also prevents acne. These low doses do not kill bacteria and hence cannot induce resistance.
4. Hormonal treatments
In females, acne can be improved with hormonal treatments. Visit your local physician for names and doses.
5. Topical retinoids
A group of medications for normalizing the follicle cell lifecycle are topical retinoids such as tretinoin (brand name Retin-A), adapalene (brand name Differin), and tazarotene (brand name Tazorac). These medications are relatively more expensive that the previous ones. They are administered as topicals and generally have much milder side effects such as an initial flare up of acne and facial flushing and also significant irritation of the skin. The retinoids appear to influence the cell creation and death lifecycle of cells in the follicle lining.
B. Alternative Medicine
Acne patients should eat whole, unprocessed foods. Orange veggetables and dark green ones are useful because of their betacarotene which helps on skin maintenance. Eat plenty of ground flax seeds as a part of a juice ( with fresh fruits ) or smoothie. Nuts are examples of healthy fat that they can eat. Protein sources can be beans, lentils, eggs and fresh fish.
Be sure to take probiotics should you take any oral antibiotic therapy to replace your “good” bowel bacteria.
Avoid junk and processed foods from your diet such as sodas, chips, dips and candy. Eat a low sugar diet.
Attempt detoxification. Juice and fruit fasts for even one day are great! You may also use super green drinks as a part of an early morning routine.
Topical Treatments:

With respect to supplements and herbs, you may use the following: