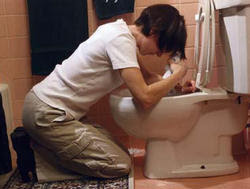 Nausea is the sensation of unease and discomfort in the stomach with an urge to vomit.Causes

Nausea is not a sickness, but rather a symptom of several conditions, many of which are not related to the stomach. If you are not suffering from upset stomach there are other illnesses that can cause this problem. Nausea is basically a reaction; the body has, due to the presence of some illness in your body.

Common causes of nausea are travel sickness ( due to confusion between perceived movement and actual movement ), morning sickness ( due to pregnancy ), also as a reaction to chemotherapy and general anesthesia, and of course as side effects to drugs ( opioids, for example ).

Other causes of nausea include:

Gastroenteritis. This inflammation of the lining of your stomach and intestines, typically caused by a viral infection or bacteria from contaminated food or water. Sometimes, the patient may have watery diarrhea and abdominal cramps.

Headache or inner ear disturbance. An intense headache, such as a migraine, can cause nausea and vomiting.

Toxins. High levels of toxins in your blood — including alcohol, nicotine and drugs such as antibiotics — can cause nausea and vomiting.

Peptic ulcers. Peptic ulcers are open sores that develop on the lining of your stomach, upper small intestine or esophagus.

Pancreatitis. In this condition, digestive enzymes attack your pancreas rather than break down food in your small intestine. Pancreatitis causes mild to severe abdominal pain, often accompanied by nausea, vomiting and fever.

Kidney failure. Unfiltered toxins can lead to nausea and vomiting.

When to visit your doctor when you have nausea?

Usually most nausea is short-termed and self limited, thus harmless. Nausea when associated with prolonged vomiting, may lead to dehydration and/or dangerous electrolyte imbalances. This, of course will need oral or parenteral fluid replacement.

Symptomatic treatment for nausea and vomiting may include short-term avoidance of solid food. This is usually easy as nausea is nearly always associated with loss of appetite. If the cause is by motion sickness, sitting down in a still environment may also help ( the motion that generated the problem needs to stop )

There are several types of antiemetics ( antinausea medication ) , and researchers continue to look for more effective treatments. Some of these are:

A. Antihistamines, effective in many conditions, including motion sickness and severe morning sickness in pregnancy. Some examples are diphenhydramine, dimenhydrinate (Gravol, very common use in some countries ), meclizine and promethazine (Phenergan).

B. Serotonin antagonists – Work blocking serotonin receptors in the central nervous system and gastrointestinal tract. They are usually used to treat post-operative and cytotoxic drug nausea & vomiting. Some examples are compazine and ondansetron (Zofran).

C.Dopamine antagonists- Act in the brain and are used to treat nausea and vomiting associated with cancer, radiation sickness, opioids, cytotoxic drugs and general anaesthetics. Some examples are as follows: domperidone, droperidol, haloperidol ( Haldol ), chlorpromazine, promethazine, prochlorperazine (some of these drugs are limited in their usefullness by their side-effects ) . Finally metoclopramide ( Reglan ) also acts on the GI tract as a pro-kinetic, and is thus useful in gastrointestinal disease; however, it is poor in cytotoxic or post-op vomiting.

D. Other antiemetics: include cannabinoids- marijuana derived (used in patients with malnutrition, cytotoxic nausea, and vomiting, or who are unresponsive to other agents ),
benzodiazepines such as midazolam and lorazepam, anticholinergics such as hyoscine and scopolamine and finally steroids such as dexamethasone.

Certainly the common sense advise of eating in small meals rather than larger ones comes into effect here. Avoid fatty or fried foods and drink fluids.

Detoxification is usually good too. One to Three day fasting with juices and water may help.

With respect to homeopathy, there are several medications that can be of effect. Please visit:http://www.hpathy.com/diseases/morning-sickness-symptoms-treatment-cure.asp 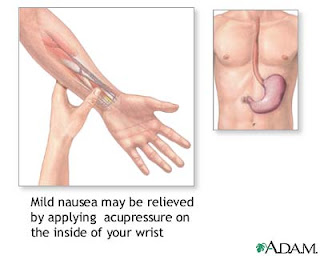 Acupuncture ( The point Master of the Heart 6, called also pericardium 6 is famous for relieving nausea ), acupressure and Chinese herbals are very effective too. Visit your local practitioner

Two herbs are famous for their antiemetic properties:

A. Ginger is a common remedy for morning sickness. It has been used for centuries in cooking and medicinally. It’s quite common for medical doctors, midwives, naturopaths, and other health practitioners to recommend ginger for morning sickness. Four double-blind, randomized clinical trials support this recommendation. The dose used in the studies was a total of one gram of ginger per day, taken in divided doses, for four days to three weeks. This is equivalent to half a teaspoon of ginger taken four times a day. It can be steeped with hot water for five minutes to make a hot ginger tea. Some sources say there is not enough information about the safety of ginger in pregnant woment to recommend it for morning sickness. You will need to pay attention to hearburn as ginger can definitely worsen it.

B. Peppermint Essential Oil. Fill a large bowl with hot water. Place two drops of peppermint essential oil in the bowl and place it on a table near your bed. Make sure it is in a safe area so there is no risk of it being knocked over.